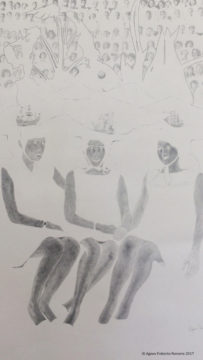 “Time & Tide” is a dialogue between the two distinctive artistic practices of Piera Costantini Scala and Agnes Poitevin-Navarre who both explore themes of departure and choices in this Parlour Room exhibition.

Costantini Scala’s photographic series of yogic postures in an abandoned Italian silk factory investigates the notion of transcendence beyond the (physical) interior space within the (spiritual) interior space. Her photographic journey echoes visual references of the Vitrusian Man and the oculus of the Roman Pantheon. She skillfully plays with light and shadows, stillness, rhythm and directions. Beyond the walls of a bygone era, new metaphorical silk roads are to be created.

In her large drawing “The Three Graces”, Agnes Poitevin-Navarre bridges mythologies, stories and archetypes of the old world and the new by composing distinctive yet inter-related cartouches based on a photographic collage. She oscillates between depth of fields both vertically and horizontally. The inverse markmaking in the foreground creates and blocks the negative space within a golden ratio of the drawing. In the middleground, a seascape metamorphoses into a mountain-scape before a sea of youthful faces from the American Dream is sketched and fixed in time in the background.

Opposedly placed in the Parlour Room, the blueness of “Murmur II” echoes part of the limited palette of Costantini Scala’s photographic series. The voyage is imminent.