Agnès Poitevin-Navarre is a visual artist passionate about art, art that pleases the eye, the brain, the heart. She is interested in the anecdotal behind the historical as well as the limits of categorizations and semantics.

She graduated with an MA from the Slade, UCL, in 1997 and has since been exhibiting locally, nationally and internationally. She works across a range of media but is known primarily for her cartographic Proustian endeavours, her Colour Coding series and Fellow Artists Fellow Muses. She composes digital collages, paints and draws beautifully. She masterminds installations, giving them a poetic twist. You will find some great work in her portfolio and can commission her to make more.

Over the past three years, she has branched out into art consultancy and has enabled collectors as well as artists to broaden their views and tastes. She sees herself very much as a matchmaker. She interviews potential collectors on their tastes, vision, theme, wall space, budget and draws up a list of artists that fits the bill. She organises gallery visits, studio visits and all the logistics of picking up and installing the artwork.  If you would like to start an art collection, contact her now.

She is also researching various artists and recent art graduates in order to promote them and act as an art coach. She wants to create a sort of collective to exhibit their work, invite them to perform, give artist’ talk and engage with each other in artistic monologues, dialogues, trialogues, quadrilogues in the parlour room of her house. This development stems from the Fellow Artists Fellow Muses ethos that she explored in the exhibition at the Royal Geographical Society and at King’s College, Cambridge, a few years ago. 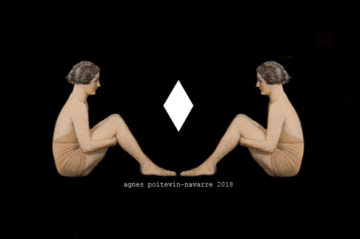 If you are a philanthropist and would like to help fund Agnes’ art practice and become a Friend of the Parlour Room, please click the donate button below.

Her BA and MA dissertations include:

Please contact her for studio visit and art commissions. She is also available for art consultancy, workshops, translation of art essays from French to English, Skype art critique/appraisal and for writing essays.

The map couples the grammar of cartography with elements from the Proust Questionnaire, a question and answer party game from the Belle Epoque designed to unlock secret insights into the mind of the respondent, forever associated with Marcel Proust. This  artistic journey saw  the  artist  act as  confidante and questioner to over a thousand Londoners as they searched to answer this most significant question. The information thus gathered and plotted, offers a view of London as a rich and varied polyvocal tapestry, revealing glimpses of individuals’ lives and aspirations.   However, instead of focusing on streets, landmarks and monuments, the artist has recorded the ephemeral experiences of people. She has challenged notions of census and bias. She has addressed the reputation of certain areas, going beyond the local knowledge of ‘good or leafy areas’ and  ‘undesirable neighbourhoods’.

The purpose of this visual vox pop is to create bonds between people who might not at first identify with each other through their social, cultural and racial backgrounds. The answers revealed many personal journeys of people who happened to live in London at the same time. The spectrum of personal tragedies and achievements that are shared here represents an accurate historical document of the lives and beliefs of these 1000+ people.

In this meditation on the individual and community, many interesting patterns appear and spread through all areas of London. Themes of everyday life emerge and are multiplied across all boroughs. Giving birth, having children, surviving childhood, cooking tips, academic  success, relationships, work/sport related achievements, climbing mountains, travels to faraway lands, moving countries or counties, buying one’s house, health issues, loss,  demonstrations of perseverance, etc. Names of loved ones appear, historical events, landmarks and institutions are mentioned. Many jokes are shared and vivid images sketched. The identity of the participants remains anonymous, a decision to compel the contributors to be true to themselves at the source and to prevent the audience from making biased  judgements, downstream.

The boroughs are divided by postcode up to sector level [ie SW17] and the ‘villages’ or quartiers appear too, so within that area, there are cartographic clues for the participants to find their contribution, to see where they fit in. From the man who won the Rome Prize for Architecture in Fulham to the  television art presenter based in Islington who was ‘the only person in his class, aged seven, who could spell laugh  correctly’, from the security guy in Bromley who has been married to Louise for 15 years to the person in Clerkenwell who climbed the Eiffel Tower in heels, stories upon stories  unravel across the map.

There is a girl who volunteered for the Tsunami in 2005, an actress/singer who played Madame de Rosemonde in Adam Cooper’s version of Les Liaisons Dangereuses in Southwark. There is a Lewisham-based poet, writer, musician, art critic, editor who occasionally plays the harmonica at Ronnie Scotts; the actor in Haringey who worked for the Royal Shakespeare  Company and was asked to play Othello in America,  the French speaking guy who promotes New York Salsa in London, a woman who walked John O’ Groats to Land’s end in 28 days for charity, another who created a play from scratch and made a room full of people laugh their socks off.  It is all there!

There is an intellectual who wrote “How Proust can change your life”  in West London, an  archivist who got a place at Oxford when no one else in her family had been to university in Central London. In South London, there is a missionary who brought a full apology for the Slave Trade to people of African descent through the LifeLine expedition. And then there is a man who bought the newspaper and a lettuce that  particular morning in Camden and someone who was crowned a beauty queen and had her photo on a postage stamp for her birth country in Haringey…

Theses are snapshots that fuel one’s imagination. Some are humorous, some are touching, others truly extraordinary. One recent contributor said: “You are a reflection of what you see in others”.  Ultimately the individuals are the lungs of the city, it is their idiosyncratic differences that breathe life into its streets, and that should be celebrated. Please use the binoculars! Agnès Poitevin-Navarre lives and works in London. She graduated from the Slade School of Fine Art in 1997 and, since then, has exhibited works and projects locally, nationally and internationally.

The artist wishes to thank all Proustians for their contribution and the RGS and inIVA for this commission.