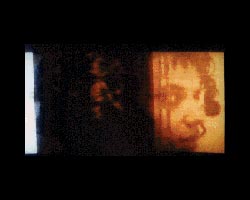 This animation of the artist orbiting on a 360 degree revolution, seen through filters of colours problematises perceptions of race passing The translucent stripes of colours refer to racial groups as black, brown, beige, yellow, red and white. These filters flick as the artist rotates creating an hypnotic movement. This piece is to be seen on a television screen perched on the top of a very tall plinth. The filters refer to the level of tolerance and prejudice incurred in every part of the world. Like a light house lamp, the artist face beams through the filters, recognising the humanity of her being away from racial and cultural constraints. The artist has been thought of being of many nationality/race including Arabic, Indian, Carribean, Spanish, Dutch, German, Swiss, Belgian!

Fellow Artists/Fellow Muses
Back to Portfolio
Twelve Degrees of Integration