In “The Age of Innocence”, the artist investigates the ambiguities of racial appearance and perception, by mapping out the variations of black and white tones of her children’s faces.

In these exquisite colour prints, she relates these variations to food terminology [coffee being the darkest, milk the lightest]. In French, the mother tongue of the artist, a person of mixed black and white racial heritage is defined amongst other things as café au lait, literally coffee with milk or white coffee.

The pleasure derived from tasting, smelling, touching, looking, is lingering in the child’s tongue where knowledge is swallowed, inquired, repeated. Racial categories don’t yet hinder the toddler’s world. Racial awareness will be taught and given an ‘appropriate’ label, a great leap into the adult world, at a later stage of language and identity formation. In this series, the artist playfully speculates on the terminology the next generation will be using to define their identity.

In ‘Half Double’, the focus has shifted into adulthood, directed at the artist and her half sister who share the same black father from South America but have different white mothers, [françaises de souche!]. The colour terms are still chosen for their obvious ‘brown’ characteristic. More emphasis is placed upon the hair texture, the natural curl versus the disguised frizzy curl and the anecdotal knowledge of their choice of spouse is affecting the next generation of their family tree/bush. It is perhaps ironic that the black and white images of the Colour Coding Series were in fact printed on a large eight colour printer. Much effort was made to stop the colours tinting the black and white iconic image… an interesting challenge in contrast to the ease with which society categorises individuals of varying tones into the dichotomic divisions of black and white.

In ‘Colour Coding Eva – Here & Now’, the tonal descriptors become political and include a collection of words that are difficult to digest due to their pejorative connotations together with more neutral labels that are born out of zoology, gastronomy and globally recognised brands. The lingering reference to concepts inherited from the colonial era veers towards an unpleasant taste is however juxtaposed with more playful word associations. This controversial piece relates to the timeline of words that have featured in the mixed race debate and some used to describe the sitter. The coordinates span between terminology borrowed from various taxonomic charts in the Americas and the Caribbean regions, the Castas painting tradition and colloquial terms born in Europe. Two hundred years after the Abolition of the Slave Trade, the national census in England has identified the mixed race population as the fastest growing ethnic minority group. The coining of positive words is urgently required! The Colour Coding series tentatively charts such a journey.

‘Colour Coding Eva – Here and Now’ was especially commissioned for the ‘Blind Memories’ show curated by Eva Langret at the 198 Gallery, London.

In the latest chapter of this series, the sitter is the intellectual, Raimi Gbadamosi who curated the touring exhibition “When in Rome” that featured ‘Colour Coding Julien & Jasper – The Age of Innocence’. This marks an interesting full circle yet a paradigm shift towards another debate of identity placed on the “in-between”, on the hyphen linking the rigid notions of black and white identity politics, that of the mythology and objectification of albinism. Raimi’s credentials on the global art scene precede his iconic look. His PhD dissertation and art practice focuses on ‘the inter-relationship between race, power and language’. The collapse of racial variation and definition thus is explored in this portrait. 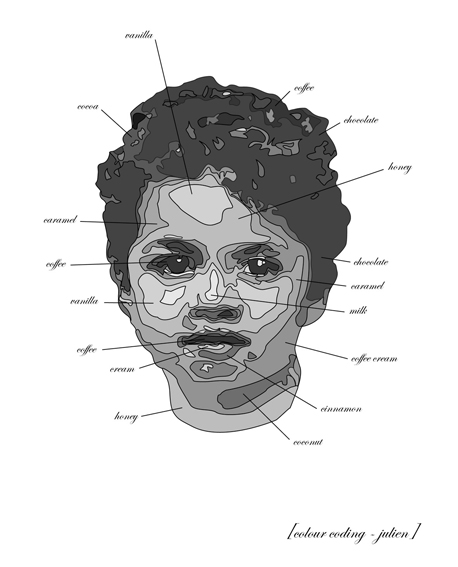