This series of eight-colour prints can be interpreted and contextualised within the tradition of naming and representing métisse (mixed race) individuals, a model anchored in the slave trade terminology and iconography as exemplified by the castas paintings of the 18th century and the idea of the ‘color line’ identified by W.E.B DuBois(1). This practice can be found in Africa (with the example of the Signares, a group of socially elevated mixed-race women, born after the union of Portuguese traders with Serere women from Rufisco in the XVII century), in the United States (with the theme of the ‘Tragic Mulatto’ and the notion of ‘passing’ emerging in literature(2)), in the Caribbean and South America (where ‘The White Negress’ embodied a taboo subject (3) and racial taxonomy that justified and reinforced the power structure of a hierarchical society). On this global stage, the term “miscegenation” called into question the rigid race classification that slavery justified; yet it articulated the “one drop of blood” rule and the concept of racial purity.

The adaptation of the race classification system in order to integrate those who fell “in-between” established categories and gave birth to an intricately detailed terminology, in particular in South America: Mestizo (originally applied only to the children resulting from the union of one European and one Amerindian parent), Mulatto, Quadroon, Octoroon and Quintroon (various degrees of mixed Black African and White heritage), but also Cholos (Ameridian and Mestizo parents), Zambos (Amerindian and Black African parents) were historically racial categories of hypodescents used in Spanish and Portuguese, French and English. To each Casta corresponded specific social privileges and pigmentoracy is a complex but still relevant model of shadism (4).

This terminology was supported by the development of an accompanying system of visual codification, known as Castas painting (see picture right), which illustrated and labeled the physical attributes and lifestyles of mixed race individuals predominantly in Mexico. 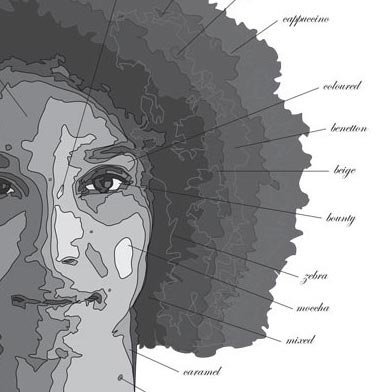 In the Colour-Coding series, the artist Agnès Poitevin-Navarre launches a visual exploration into the politics of mixed race self-identification. She playfully investigates the ambiguities of racial appearance and perception (historically defined by eurocentric taxonomists), by defining the landscape of her subjects’ faces.

She does this first by mapping out the variations of the black and white tones of their pigmentation and then through linking those blocks of seemingly monochromatic colours to food terminology [in the Age of Innocence] and a plethora of racially charged words [ in Here & Now]. This creates a correlation between numerous points of reference, and in particular, the symbolism of the land, food and language as markers of one’s identity and sense of belonging.

The mastication of language is pivotal to ascribe a definition to the concept of the exotic and the vernacular embodied by mixed race people.

In the ‘Age of Innocence’, the faces of toddler Julien and baby Jasper exist as a platform to speculate on the terminology the next generation will be using to define their identity. Each type of food used to signify a particular tone has its own idiosyncratic characteristics. However, they all share in common one unifying feature. The pleasure derived from tasting, smelling, touching, looking, is lingering in the child’s tongue, where knowledge is swallowed, inquired, repeated.

Racial categories don’t yet hinder the toddler’s world. Racial awareness will be taught and given an appropriate label, a great leap into the adult world, at a later stage of language and identity formation. In the French language (the mother tongue of the artist) a person of mixed black and white racial heritage is defined amongst other things as café au lait, literally coffee with milk or white coffee.

In ‘Here & Now’, the tonal descriptors relate to the timeline of words that have featured in the mixed race debate. The coordinates span between terminology borrowed from various taxonomic charts in the Americas and the Caribbean regions, for instance sang-mêlé [mixed blood] is 125 parts African ancestry to 127 parts European in Haiti (5). It includes a collection of words that are difficult to digest due to their pejorative connotations together with other labels that are born out of zoology, gastronomy and globally recognised brands. The lingering reference to concepts inherited from the colonial era is juxtaposed with more playful word associations.

Two hundred years after the Abolition of the Slave Trade, the national census in England has identified the mixed race population as the fastest growing ethnic minority group. The coining of positive words is urgently required! The Colour Coding series tentatively charts such a journey.

(1) The Souls of Black Folk’, 1903. ‘The problem of the twentieth century is the problem of the colour line – the relation of the darker to the lighter races of men in Asia and Africa, in America and in the Islands of the sea’. p 13 (back to top)

(2) The “tragic mulatto” is an archetypical mixed race person that appears in American literature during the 19th and 20th centuries. She is portrayed as a victim of circumstances that will lead to suicide due to her failure to fit in either the “white world” or the “black world”. See Lydia Marie Child’s 1842 short story “The Quadroons” and Nella Larsen’s 1929 novel “Passing” (back to top)

(3) In contrast to the Mulâtresse Solitude, an historical figure of the Caribbean Resistance of the late 18th century, see Mayotte Capecia’s ‘Je Suis Martiniquaise’ and ‘La Négresse Blanche’ that is vilified by Fanon in ‘Black Skin, White Masks’ and also the poetry of Leon Gontran Damas, one of the three fathers of the Négritude Movement who dwells on the theme of assimilation and alienation in ‘Pigments’. (back to top)

(4) The preference for light-skin blacks. (back to top)

(5) In 18th century French colonial Haiti, there were nine categories of African and European mixture that were defined based on the assumption that people had 128 parts of inheritance. Mulâtre is 64 parts European and 64 parts African, Marabou 40 to 48, Métif 101 to 112 and sang-mêlé 125 to 127. (back to top)